As of January 2021, a woman sits as Vice President in the White House. For centuries, a series of courageous, trail-blazing women toppled obstacles and paved a way for Kamala Harris’s historic accomplishment. Women have struggled to secure their places at the heads of conference tables, in front of lecture halls, and at the congressional dais. Although the fight for equality presses on, so do generations of tenacious women. In celebration of Kamala Harris and the generations of women entwined with her legacy, Live Good is proud to introduce you to five empowered female leaders, shaping our community with their unique vision and tenacity.

I had always been involved in churches where women could lead, under the authority of a male pastor.  So, this change in philosophy for “women in ministry” was revolutionary.  I was honored and felt extremely humbled.  And the thing I believe meant the most to me was how this would be groundbreaking for all the younger women ministers on staff who really did have the desire or dream to be a pastor one day!

I think the primary piece of advice I would give my younger self is to take the time to learn who she is, her strengths and weaknesses and to limit comparing herself to other people or what people deem “normal” for as one of my uncles used to say “to be normal is abnormal.” Along these lines, I would also encourage my younger self to embrace all of who she is – strengths, weaknesses and all – and to seek how she can use the gifts she possesses to help others and to be open to how her weaknesses can also be a gift to others.

We only get one shot in this life to become the best version of ourselves and to make an impact. If you’re just okay and nothing new is happening, then you’re not growing, and if you’re not growing, you’re getting left behind. We are all made for greater things; it’s a shame not to achieve that greatness.

I think it’s important to appreciate what is beautiful in the world even in the midst of a difficult situation and thank people for their contributions. Next is practicality – there are ups and downs and failures in work and life. I truly believe that the perfect is the enemy of the good so taking a practical and realistic approach to work is very helpful.

1. As the current Mayor of Yorba Linda, why were you inspired to run for public office and what is your vision for the community you serve?

Prior to my election, our city council was divisive and decisions on long term planning and infrastructure investments were not being made. There was a lot of fighting between “the past” and “the future.” I believed that my skills as an attorney to mediate and background on public policy could build a consensus on long-term economic plan that will ensure sustained sales tax base and infrastructure investment.

After I was elected, I set forth a 20-year economic development plan for our city. We improved our road condition to the highest federal highway ratings. Our city also built a new Town Center, Library, and Arts and Cultural Center. We do not have any general obligation debt on any of our public projects.

2. Tell us about your background. Where did you grow up and how did your childhood shape your journey?

I Immigrated to the United States when I was seven years old. I was the first non-English speaking student at my elementary school. Because there was no ESL classes, I learned English at my local library. Given that we were one of the few Asian families in our neighborhood, we faced racism and ridicule for not being able to speak English. I worked hard to learn English and the American culture so that no one could take advantage of our family. At the same time, I grew up in a very traditional, male-dominant family and my parents’ greatest hope for me was to marry a guy who will treat me well. Consequently, I pursued my career on my own and determination to succeed.

When I was five years old, my home was ransacked. It affected me tremendously. I still remember vividly how each room looked when I stepped into the house. I vowed I would become a prosecutor to put criminals behind bars. Unfortunately, I did not receive a lot of support from my family to pursue a legal career and they were adamantly opposed to my political involvement.  However, I felt there was a need to pursue justice for victims of crime and I refused to give up my dream to be a prosecutor. I did not want to see another child be a victim of crime.

For as long as I can remember, my motto has been: “just ask the question,” because there is an opportunity for a gain and not a loss. I did not see a “no” as a rejection of me; rather, it was a rejection of the thing that I was asking for. I was never afraid to admit I did not know something and always sought help and mentorship. Because I had to learn English and navigate American culture on my own, I am fiercely independent and pursue issues by immersing myself in the subjects. This pursuit allows me to research and analyze issues without being unduly influenced by special interests.

3. What kind of roadblocks have you faced and how have you overcome them?

Sometimes, people do not take me seriously because they assumed I looked younger than I am.  They also assume that I am a housewife too! When I became a community activist, the city council members dismissed me and did not believe that I could get an entire neighborhood to oppose their agenda. I utilized my campaign skills and analyzed the subject matter to counter the city council’s special interest-backed project. I organized my community and personally knocked on nearly 1000 homes to get residents to sign my petition. I also did not appear before the council as a person who only said “no” but offered no solutions. I presented the city council with alternatives and modifications to their project that were more acceptable to residents. By showing the city council and residents that there are always ways to solve a problem without being hostile, I established myself as someone who could build a consensus and knowledgeable on city matters.

4. How has being a woman shaped your accomplishments?

As a woman, I feel more pressure to succeed than my male counterparts and I have to work twice as hard. Growing up, my parents’ hope for me was to marry a nice guy who could provide for the family and I stay home with the kids. I feel the society has the same expectations of me as do my parents. Even more, I think the society opine that women should not be in position of leadership because women are often thought of being emotional rather than logical. Within this framework, I have been successful in solving complex problems using logic infused with empathy, a much needed emotional ingredient that experiences the consequences of the solution. The compassion I have as a leader influences how I chart the solution and its effect on individuals. The balance of logic and empathy provides the human element to the solution. I think that a woman’s intuition is my greatest asset in finding innovative solutions that have positive impact in people’s lives.

5. In your opinion, what attitudes are crucial to success?

Have an attitude of never being afraid to ask. We should be mindful that we are starting with nothing when we ask another individual for something. If the individual declines, you do not lose anything. However, if the individual obliges, you gain something.

6. For those young people interested in pursuing a career in politics, what advice can you share with them?

I suggest getting involved with the community and the interaction will give the young people insights on people’s needs. By understanding their needs, a potential candidate can create a platform that will serve the community. I also suggest that a candidate thoroughly vet the campaign consultant. Often, the consultant has his own agenda and can influence the candidate to take on the consultant’s agenda rather than his own.

On the other hand, I do not suggest jumping into politics without having the compassion and empathy for the people you serve as well as a focused plan for the future of the community.

Lastly, you need to have an understanding of the problems that exist in the community and formulate a plan for five, ten, and 15 years. This blueprint helps the city plan and establish a credibility with the voters.

Mayor Peggy Huang is a Deputy Attorney General in the Office of the Attorney General, Criminal Appeals, Trial, and Writs section. As a former Senate Fellow, Mayor Huang worked on the CALFED Bay-Delta project, which involved restoring the Bay-Delta ecosystem and water storage and delivery. As a trial attorney, she prosecuted individuals who abused and neglected clients in facilities licensed by the California Department of Social Services and represented foster children in juvenile court. She was involved in two bills, signed into law, that protected abused and neglected children.  In addition, she successfully advocated for the decoupling of the Child Welfare Entitlement (Title IV-B) from the Federal Welfare Reform Act and protecting the Social Security Block Grant (SSBG) from reduction to ensure funding for at-risk and foster children.

She received her undergraduate degree at the University of California, Berkeley, and her Juris Doctorate, as well as a specialized certificate of governmental affairs from the University of the Pacific, McGeorge School of Law. 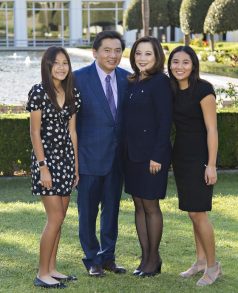