1. Tell us about your background. Where did you grow up and how did your childhood shape your journey?

I am one of those people who grew up in many different places. While my father stayed at the same company for his entire career, he sought different opportunities within that company, which resulted in my family moving around a decent amount. I spent most of my childhood years on the East Coast of the USA and overseas in Japan. The longest we lived in one geographical location was about 6 years.

I feel fortunate that despite having moved around quite a bit during my childhood, that we typically stayed in one location for at least 4-5 years, so it didn’t feel too disruptive. I was also very blessed to have parents who fostered an incredibly loving and stable home where I was secure in knowing that I was loved, and brothers who contributed to that atmosphere as well. Looking back, I believe that my experience moving around and having to start new a few times in that loving family context made me resilient as well as a quick adapter to new environments and situations.

Additionally, living in Japan for five years during my elementary and middle school years had a tremendous influence on me. Having that opportunity at such a young age, interacting with kids my age from all over the world at my international school and having the ability to travel with my family in Asia, Europe and across the USA opened my perspective and expanded my point of view from being one that was USA-centric to one that had a better understanding of the beauty in the diversity of our world and also the things that connect us as people no matter what your ethnic, racial or cultural background.

2. You work in a very interesting field. Why did you pursue this industry?

To be honest, when I started my legal career, I had no idea that I would end up being a commercial nuclear regulatory lawyer supporting utilities who own and operate commercial nuclear power plants in the USA and in that sense, I did not specifically pursue a job in this industry.

My legal career path has not been a conventional one. When I graduated law school, I felt led to take six (6) months to participate in a Christian program, which was one of the best decisions I’ve made. Following that program, it took me about another 6 months to find a legal job, which ended up being with a medium sized law firm doing general litigation work. About two (2) years after working at that firm, I had the great opportunity and honor of clerking for a federal district court judge in South Carolina. As my clerkship was coming to an end, I began applying for a number of jobs. An associate attorney position opened in the energy practice, and specifically, in the commercial nuclear energy practice, of a law firm in the Washington, D.C. area. While I did not know much about the commercial nuclear industry at that time, I felt that this was the right position for me and was blessed to be offered the job. Looking back now, I’m so thankful for that opportunity as I have thoroughly enjoyed and continue to enjoy being a commercial nuclear regulatory lawyer. I have found that the individuals who work in the commercial nuclear industry are bright and genuine people, who believe in the technology as a source of clean energy and truly desire to help ensure that the electricity produced from nuclear power meets the needs of communities where they are located while taking seriously the responsibility that comes along with this special and unique technology.

3. According to our Founder who has known you for over 20 years, you are one of the most humble and brilliant people she knows. How do you remain so grounded?

Jen is much too kind and I am humbled that she would say that about me. For me, my center and foundation is my Christian faith and more specifically, my relationship with God, Jesus and the Holy Spirit. That personal relationship is what keeps me grounded, day in and day out. God is the first person I turn to when I’m facing difficulties of any kind or when I’m seeking guidance for any situation in which I find myself.

4. The Fulbright Scholarship is widely considered the most prestigious international scholarship. As a Fulbright scholar, what was your area of study and how did that experience impact your life?

I feel extremely fortunate to have been selected for the Fulbright Scholarship after initially being put on the wait list, which allowed me to spend a year after college in Seoul, South Korea. During my time in Seoul, I studied how the 1980s South Korean student movement defined democracy in the context of a strong anti-American sentiment given that the USA was typically held up as the model of democracy. It was enlightening to learn that the anti-American sentiment was based on the students’ perspective that the USA was hypocritically supporting the South Korean government at the time, which from their perspective was a military regime despite being a democracy in name. To assist in studying this topic, I also spent 20 weeks of that year taking intensive Korean language courses.

In terms of how the experience impacted my life, to be completely transparent, the parts of that year that impacted my life the most had less to do with my area of study and more to do with how spending a year in South Korea impacted me relationally. My parents immigrated to the USA from South Korea, met and married in the USA, and my brothers and I were born in the USA. Having the opportunity to live and learn in South Korea for a year after college was invaluable from the perspective of gaining a deeper understanding of my ethnic heritage and also understanding, in a more innate way, my parents. Additionally, I met three of my closest friends with whom I still keep in touch with regularly to this day in the Fulbright Scholarship Program. Finally, although I grew up in a Christian home, it was during my year in South Korea that my personal relationship with God, Jesus and the Holy Spirit was completely renewed. My life has not been the same since that time.

5. What advice would you give your younger self?

This is a tough and good question. I think the primary piece of advice I would give my younger self is to take the time to learn who she is, her strengths and weaknesses and to limit comparing herself to other people or what people deem “normal” for as one of my uncles used to say “to be normal is abnormal.” Along these lines, I would also encourage my younger self to embrace all of who she is – strengths, weaknesses and all – and to seek how she can use the gifts she possesses to help others and to be open to how her weaknesses can also be a gift to others.

Esther received her undergraduate degree in Sociology in 1999 from Stanford University, and her law degree in 2004 from Georgetown University Law Center. Esther currently works for an electric utility company in Phoenix, Arizona and her main area of practice is nuclear regulatory law.  She advises on a wide variety of legal issues related to operation, maintenance, export compliance, contract negotiation, and safety culture. Prior to her current position, Esther worked for an electric utility company in Southern California and before that, worked at a large international law firm in its Washington, DC office, where she represented nuclear utilities and other firm clients in related industries on nuclear legal issues. 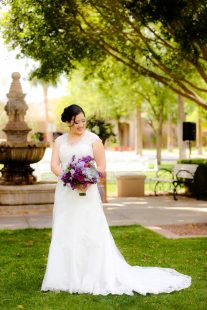